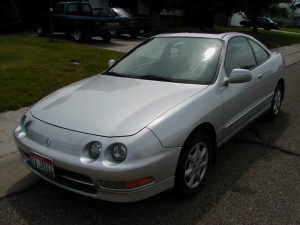 This past weekend, Jess and I finally pulled the trigger and bought a new car. Â It was obviously needed for the 2 little bundles of joy that are rapidly approaching. Â We needed something bigger. Â Something safer. So, we bought a 2010 Hyundai Santa Fe. Â But this post is not about the new car. Â It’s about my old friend.

We first met in March of 1999. Â I was still in college and delivering pizzas and was fresh off the nightmare that was my 1987 VW GTI. Â The same car that cost me $250 every other month in repairs like clockwork. Â The car I bought for $7500 but probably ended up paying over 15 grand for when you add up all the repairs. Â To say I was trepidatious would be an understatement. Â I wanted something nice, but more importantly I wanted something reliable.

I saw you sitting on the lot. Â 1996 Acura Integra. Bright silver paint gleaming in the early spring sunlight. Â Took you for a test drive and immediately knew you’d be the one. Â You were sporty. You were fun. At almost $11,000 you were more expensive than all my previous cars put together. Â As an aside those cars were, in order, a powder blue ’78 Datsun longbed pickup, an ’84 Honda Civic, and the aforementioned VW.

You were a lease return with a single owner. Â But more importantly, you would be mine. Â I knew Honda/Acura’s rep for reliability, but still I ended up purchasing an extended warranty anyway. Â That’s how gun-shy I was.

It was a long time ago. Â But ever since that day, we have beenÂ inseparable. With the exception of theÂ miscellaneous vacation, I’ve driven you just about every single day for 11 years and 5 months. Â Approximately 4,015 days. That is like buying a car halfway through your 1st grade year and driving it every day until you graduate high school.

You have been my oneÂ singularÂ constant over these past 11 years. Everything else has changed, but you were always there. Â Friends have come and gone. Â You were still there. I’ve lived in 6 different places, bought 2 houses. You always helped me move my crap. I worked at Pizza Hut, 8 years at Hewlett-Packard and 3 years at Wirestone. You drove me there every morning. I went through single, dating, engaged, married, divorced, single, dating, engaged, married and kids on the way. You were always there.

The 4th digital picture I ever took was of you (the one above). I’ve now got more megapixels in my phone than that camera had and I had already owned you for a year. Â I’ve since taken over 20,000 pictures. You never complained that you didn’t end up in more of them.

You weren’t perfect. The AC hasn’t worked for years, which made for some hot sweaty summers. Â Your power antenna stopped moving up and down. As I got older, I complained about your manual transmission, but it wasn’t your fault that I was getting lazy. When your cupholders had contents, I couldn’t see the radio. But the only major repair I ever had to do in 11 years was replace your radiator. You showed your age like any 14 year old car would with various squeaks and rattles.

But you still ran like a top. My last tank of gas got me over 35 miles per gallon. I think this is one area where you actually improved over the years. Â Almost like you knew the price of gas was going up and were going to do everything you could to help me out. You survived all those winters being parked outside without ever leaving me stranded.

Friday evening we received a call from the dealer that they had the very model of car that we had been searching for. Â So, first thing Saturday morning, we drove over to the dealer to see if we could make a deal. Â I don’t know why, but during the drive I don’t think itÂ occurredÂ to me at the time that this would ultimately be my last time to drive you. Â I think I was too focused on negotiating a good deal and the obvious excitement of possibly getting a new car. Â I wish now I had taken a bit longer to drive there. Â I wish I had recognized just howÂ momentousÂ the occasion was. Instead, I zipped into the parking lot and hopped out. Blithely oblivious to the fact that that was the last time I would ever sit in your seat or close your door.

Three hours later, I had negotiated you away. I’d like to think that I did you one last solid. Â They had offered me $1,800 on your trade in. Â In the course of the negotiations and in my efforts to drive down the price of the new car, they added those negotiated dollars to your value. Â Sure, it all comes out the same in the end, but I ended up trading you in for $3,400. That has to make you happy. Â Your last act to me was to get me a better deal for your replacement. Â Thank you buddy.

Upon leaving the dealership, you were parked right next to the door. Â So, I snapped a few last pictures of you with my cellphone. 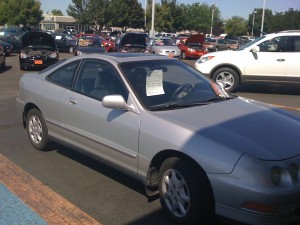 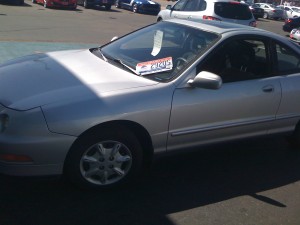 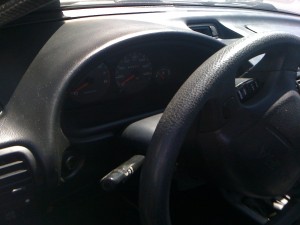 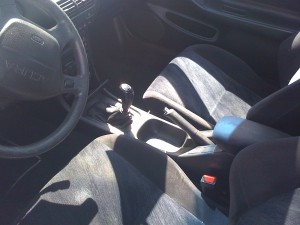 And that was that.

No car will ever mean more to me than you did. I can promise you that. I will miss you.

I hope your new owners love you half as much as I did. Â I’ll keep my eyes peeled for you when I’m on the roads. Â I will always remember that road trip to Vegas where we made it in less than 9 hours and you put up 100+ in the middle of the Nevada desert.