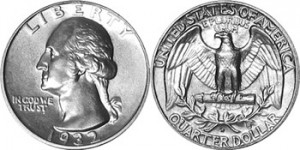 The other day I was jingling some change in my pocket, not really thinking about anything.Â  When I pulled it from my pocket and looked at it… I must admit I still got small charge from it.

There they were.Â  Quarters.Â  Dear god do I still love quarters.

When I was a kid, quarters were the first “real” money you could get.Â  Sure, for a penny you could get a crappy bit of bubble gum from the machines in front of the grocery store.Â  Nickels were silver, which was cool, but nothing fun ever cost $0.05.Â  Dimes were smaller than everything else but still had some of the nickel’s stigma.Â  But quarters… quarters ruled my world as a child. Do you remember the excitement of actually finding a quarter on the ground? Like winning the kid lottery.

The first thing that one notices with quarters are the size.Â  Even just by feel you know they what they are.Â  Bigger than everything else (except those fifty cent pieces, but how often did you lug one of those bastards around?) and with those ridges around the outside.Â  It wasn’t just the quarter itself. It was everything a quarter represented. When you had a quarter you finally had some legitimate buying power.Â  When I was a kid, buying power was not something one possessed lightly.Â  Forget a piece of gum. For a quarter you could get a superball!

Obviously to a kid that grew up in the late 70’s and early 80’s, the main draw of quarters was video games.Â  If you had a quarter, you could play any game you wanted any time you came across one.Â  I vividly remember going to the old Sea Galley in Boise (where Outback Steakhouse is now) with the family when I was about 10.Â  In the waiting area they had the tabletop version of Galaga. When you’re a kid, waiting of any kind is akin to Chinese water torture.Â  Waiting in a room with a functioning arcade game and no quarters might as well have been water torture combined with the pulling out of fingernails and just for fun random shocks via a cattle prod.Â  Trying to pry a quarter out of Dad to play a video game was like getting a wise man to part with the meaning of life.Â  Just wasn’t gonna happen.Â  I just had to sit and suffer and watch some other kid get to play.Â  If I had just had a quarter on me, everything would have been right with the world.

I contend to this day there is no problem on earth that couldn’t have been fixed by a pocket full of quarters and a flashing, noisy arcade to spend them in. I believe my love of arcades is probably for another post, so I’ll just move on.

Even as I got older, quarters never lost their magic. You needed a pop from a vending machine? Bang.Â  Two quarters got you there. (This was before they ever had dollar changes on them things).Â  Needed to make a phone call to Mom to pick you up from the movies? A quarter into the payphone. How about the first time you went to Vegas?Â  Back then there were no nickel or dime slots, and don’t even ask about penny slots.Â  Quarters baby.Â  Nothing will ever match the time I was in The Barbary Coast casino on The Strip and won $90 from a slot machine only to have it all dispensed in quarters. The “clank clank clank clank” sound of quarters falling into the tray must have lasted 5 minutes. 360 of them. If my 12 year old self could have been there for that, he would have probably had a brain aneurysm from the excitement.

Of course nowadays, quarters simply aren’t as important as they used to be.Â  First off, with inflation nothing that cost a quarter when I was a kid still costs a quarter now.Â  A paper dollar bill just doesn’t have the same style… the same panache. Arcades are mostly gone except for the seedier places, but you have better games on your living room TV anyway. Payphones? Nope. Even Vegas slot machines use no coins any more.

It kinda makes me sad that my kids will probably never have the attraction to quarters that I once did.

Though personally, I doubt I will ever get old enough to forget how much lifelong joy quarters have brought me. 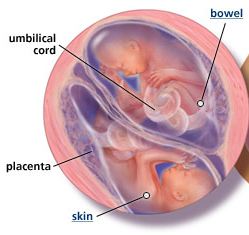 Listen up twin fans. Â If you’re interested at all about the big news as far as the sexes of these little twerps we currently have on layaway, we should have an answer to that during our August 3rd (20 week) ultrasound. Â Needless to say, Jess and I are pretty friggin excited about that.

So, while we’re at it, we might as well get a little competition going!

Here’s the deal. Â Post a comment on this blog post below with your guess (Note, guesses must be made here. Facebook or Twitter guesses will not be official). Â The competition will consist of 2Â separateÂ guesses on your part. Â First one being this pick of the sexes of each. Â Obviously, there are 3 possible outcomes here: boy & boy, girl & girl, and boy & girl. Â Some guesses which will NOT be accepted: “pale and pale-er” (too easy), Â “mermaid and merman”, orÂ “Edward and Jacob”.

Part 2 of your guess will come on delivery day. Â As it approaches, we’ll have another round of guessing (here on this blog as well) where you will come up with the total combined weight of both of these munchkins. Â  Whoever picked the sexes correctly and is closest in weight wins.

We haven’t figured out fabulous prizes yet. Â I’ll have to put some thought into that. Â If you have ideas as far as that goes, go ahead and include them in your guess.

As far as heath wise, everyone is doing swimmingly. Â Jess is an absolute trooper. Â Aside from fatigue and the occasional heartburn she’s doing great. Â Bathroom trips every 37 minutes excepted. Â As far as we can tell, the kiddos are as good as can be expected. Â By the way, we’re at 17 weeks today.

So, let us have it. Â Anything worth doing is probably worth turning into a competition and gambling about, right?

Get your guesses in today!