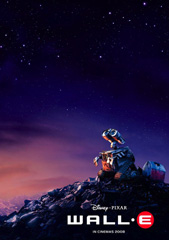 Yes, I know I haven’t blogged in forever.Â  Cut me some slack… I could NOT be more busy. More on that soon.

Disney/Pixar’s latest masterpiece was released this past weekend to huge critical lauding.Â  Since, it was triple digits outside, Jess and I decided to spend a few hours in a nice air conditioned theater and see what all the fuss was about.

Bottom line?Â  They hit another home run.Â  I don’t know how they keep doing it, but every film they make is amazing.Â  Not a flop among them.Â  When you stop and think about it, it really is incredible.Â  Name me another studio that EVERY movie they make is a guaranteed winner?Â  Doesn’t happen. I can tell you one thing… I would hate to be they guy responsible for the first movie they make that kinda sucks.Â  You know its going to happen eventually.Â  But not this time.

Anyway, the story is as follows (note, as always, there might be spoilers in here, so read on at your own risk)… the earth has become so polluted that the humans have all left aboard a huge spaceship called the Axiom.Â  They left behind an army of robots to clean up the planet, however, as the movie begins, it doesn’t look so good.Â  Turns out, only one of the robots left behind is still operational.Â  Wall-E.Â  He lives in his own little world, spending the days making solid blocks of garbage and his evenings watching an old VHS of “Hello Dolly”.Â  He’s a funny little robot, who collects interesting pieces of garbage to decorate his little docking station and his only friend is his pet cockroach.

That is, until one day a huge frightening spaceship lands and drops off a state of the art robot on a secret mission.Â  Eve, or “Eve-a” as Wall-E calls her, is slick and modern.Â  If Wall-E looks like he was made by Caterpillar, she looks like she was made by Apple. Wall-E is immediately smitten and after a few shaky encounters, he slowly ingratiates himself with her.Â  Eventually, it turns out her mission is to try to find living plant life on earth.Â  It just so happens that Wall-E just found some and unknowingly presents it to her.Â  In typical woman fashion, once she gets what she wants she completely shuts down just flashing a leaf symbol on her front.

This first half of the movie has a real Cast Away feel to it.Â  Not much dialog at all.Â  Lone character, going about his business with no one to talk to.Â  I find it interesting when writers can find a way to tell a story without relying on dialog.

Once Eve’ ride returns, Wall-E doesn’t want to her to leave, so he stows away on the space ship heading back to the Axiom.

On the Axiom, robots do everything.Â  People just ride around on hover chairs and get fat.Â  Even the captain of the ship is at the mercy of the auto pilot computer Otto, which looks (and ends up acting) quite a bit like HAL from 2001 a Space Odyssey. Nice touch there.

I won’t give away the rest of the plot, but it was well done and fun to watch.

Pixar is very good at anthropomorphizing their characters and making you care about them.Â  This movie is no exception. Even if Wall-E tends to look a little too much like Johnny 5 from that 80’s classic Short Circuit.

We saw it in a digital theater, and dear lord the picture was out of this world (har har). The animation is very well done, but in a different way than Ratatouille.Â  The shots of outter space and all that it contains are just mindblowing.Â  The visuals alone are worth the price of admission.

As with all Pixar movies, there are messages hidden just under the surface.Â  Wall-E is no different.Â  In this day and age, it was quite current with the themes of being green, protecting our habitat, and over consumption.Â Â  The only corporation in this was called “Buy N Large” which definitely had WalMart overtones to me.Â  It was all of their name brand crap that trashed the planet in the first place, and they were in charge of cleaning it all up, and failing miserably.

All in all, it was an excellent movie.Â  Plenty of content for both kids and adults.Â  And, like most Pixar movies, this is one which will probably require multiple viewings to pick up on all the stuff that is going on in the background.Â  I highly recommend seeing this flick this summer.Â  You won’t be disappointed.