Well, I think Saturday was probably one of my better days “since”. More on that in a minute. Friday was a little tough, because G loved Cinco de Mayo. Not to mention, at one point, we were planning on having a big party for that day. Needless to say, I thought about her more than once durring the day. I had an eye checkup scheduled that day. Side story, one reason I should have seen this coming before I did, we had originally had eye appointments at the same place scheduled 30 minutes apart. When we got the notices a few months ago, I made the comment “Hey, maybe we can go to lunch that day since we’ll both be down there.” Her response? “That’s a month and a half away.” At the time, I was a little confused by this response. However, looking back, it makes perfect sense that she had already planned to do what she had planned and we wouldn’t be together when that came around. Stupid me.

Anyway, the eye appointment was kinda tough. She got her glasses at the same place and we had been in there multiple times. They are really friendly in there though, and when the lady there had called to confirm the appointment, she mentioned that she had heard I had a ‘change’. I’m assuming G called to cancel her appointment and told her why. That was good so I didn’t have to answer the question, “How is G?”. I dread that question.

So, I had my appointment and need some glasses for computer work. I also bought a pair of Oakley sunglasses to replace the sunglasses I lost on our last trip to Vegas in Feb. (One more reminder) So, Friday night I came home and decided I was going to cook for the first time in my apartment. I’ve only been here for a month, its about time. So, I went to Albertsons and got the fixin’s for tacos and a twelve-er of beer. I cracked a beer (first one I’d had in the apartment as well) and cooked some grub. Not gourmet by any stretch, but it was a start. Again, another step to normalcy.

However, Saturday has been one of my better days since all this happened. Earlier in the week, George invited me over for a bbq at his place. So, I rolled out of bed about 10am (I’m finally sleeping better. The ambien works) and played some games and did some work for my 2nd job. Talked to my boss for my 2nd job and got my next steps squared away and I think I understand what’s needed, which is always a good feeling. Then, I went to George’s place. I took some beer and we BS’ed for hours. His daughter Catie was sleeping and wife was at work, so we could just talk. Computers and movies and just crap. Just shooting the shit. Then, he fired up some burgers and fed me a good meal. It was really nice. His daughter is adorable (see ‘knitting on call’ to right) and his wife is really nice.

Then, I had gotten a call from Adam, a friend that I had known for a while as part of the couple Beth and Adam. They were couple friends that G and I had. I had sent him an email hoping that we might still be able to do things together, not really sure what to expect. You will notice in the post One Month below, I conspicuously left Adam and Beth out of the list of friends not to see again hoping that I still might see them, or at least him. Anyway, the party was at Barry’s place. I got there and it was really really nice of them to invite me. It was just really good to see some people I had known PD (pre-divorce). Barry, Coach Mac, Bobby BoSox, Hoffey, Becker and Adam. I only took a $50 bankroll and was more than happy to lose it all, if for no other reason to get out of the house and have a few beers with these guys. Just being there was really good. Almost felt like things were back to normal for a few hours. I can only hope I’m included in some future games. I would have one at my place, except for the fact I don’t have room in my apartment for a table. We could play in my storage unit where my table and chairs are I suppose, although that doesn’t quite doesn’t have the ambience one might like. I busted out early and it was still nice to sit at the table and have a beer and shoot the shit. I would be happy to drop a hundy every game if I keep getting invited. Its worth that much to me. Plus, I’m really craving a Dublin Dip from Barry’s Bar/Restaurant. Haven’t been there since a week prior to the event. And we used to be there once a week with regularity. Barry said flat out to me, ‘don’t hesitate to come back to the bar’. Logically, I know that should be the case since its a free country but to hear him say it really carries a lot of weight for me. I still just dread the ‘bump in’.

On a side note I forgot to mention… I got a envelope in the mail on Friday. It was from the attourney. I guess we’re officially divorced… I guess… I read it and its the same thing I signed 2 weeks ago or whatever. Its always fun to see the final nail get driven into the coffin. I know the deceased is not getting up again, but that doesn’t mean that the finally doesn’t sting a little, ya know? *sigh*

Alright, enough of the novel. Going to bed. Maybe I do have some friends left after all… I can’t tell you how happy that makes me. Although, I forget that people haven’t been in the loop on what’s gone down ‘since’. Maybe I’ll direct them here to get a rundown as to how I’m doing. 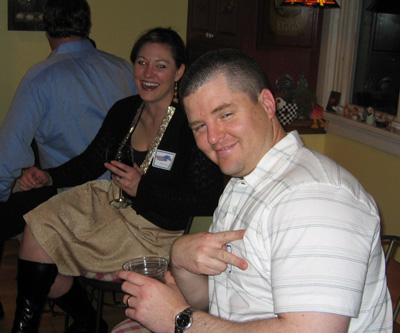