Life in the suburbs is generally boring.

Ok, perhaps that’s a bit strong. Maybe I should go with “sedate”. In fact, I’d argue that is one of the main draws of the burbs is that you know what life is going to be like. It’s a calm, quiet existence perfect for raising a family, which is why we moved to one. You get to avoid a lot of the kooks who inhabit more urban areas, which is a-ok with me.

However, life in the suburbs isn’t always as it seems. I’m going to tell you of a minor suburban mystery that happened at our house that has yet to be solved. I wish I had more answers for you, but unfortunately I don’t. Someone get Robert Stack on the phone.

The storyÂ happenedÂ a couple months ago.

Jess was traveling for business to Seattle for the day and left the house before 6am. I had my usual morning before work. Â It was just like any other day… Until I got home from work late that afternoon.

I walked out the front door to go get the mail, and as soon as I opened the door I saw something strange on the doorstep right next to the door. 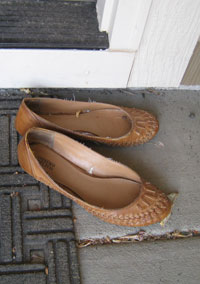 A pair of women’s shoes.

I know what you’re thinking… “Big deal. You do know that you LIVE with a woman, right?”. Â Of course, you are correct. However, these were shoes I’ve never seen before. In fact, they are a much smaller size and totally different style than Jess wears. I stood there for a second just looking at them. Wondering why in the hell they were there. I did a cursory glance around our street, but obviously there was nothing there. I mean, this is a dead-end street in a subdivision bordered by farmland.

Jess called to check in not long after I’d found them and I asked her, “Um… did you leave some strange shoes on the porch?”

Oooookay… So this leaves me full of questions with no answers.

From the position of the shoes, it really looks like someone was being a good guest and slipped them off before going into the house. However, the door was fully locked when I opened it to go out. There was no way someone who didn’t have a key could open the door. And nobody that we know who has a key came over that day.

So the question becomes, why would someone visit my front door, take off their shoes and leave them there? I mean, leaving your shoes somewhere isn’t exactly like dropping your wallet or cell phone. You’ll know immediately that you don’t have them the second you take a step. “Hey, I have little rocks poking me in my feet… that’s odd… oh wait, I think I might be missing my shoes…”

I was so baffled by the whole thing, that I left the shoes on the porch for a couple weeks with the thought that the woman who left them there might remember that she did and come get them. Â But no dice. They just sat there. Mocking me with unanswerable questions every time I went out my front door.

I’ve spent the last couple months trying to come up with plausible theories as to why these shoes were there, and I’m coming up dry. I could come up with no logical scenario where a woman would come to the door, find nobody home, then remove her shoes there before leaving. The only thing that would make sense to my mind is that someone was playing a joke on me, and specifically left the shoes there simply to confound me. The worse theory is that this is the first sign of some sort of Haitian voodoo curse and that my feet are going to end up rotting off the bottoms of my legs or something. Let’s hope that’s not the case.

Having been stumped, I open the floor to other theories. I appeal to the collective wisdom of the internet (which in and of itself might not be the smartest idea) to help me figure this one out.

Postscript: Murphy was just as confused as I was… 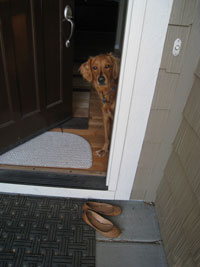