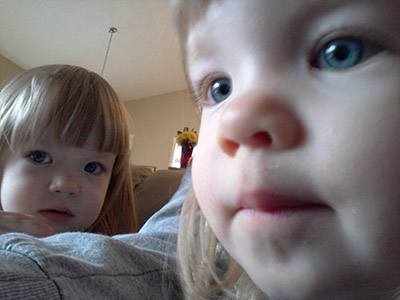 Life with toddlers learning to talk is just one of those things. Sometimes it’s terrific and sometimes it’s not. More so of both when there are two of them spewing words at you non-stop.

For example, months ago they adopted the word “milp” which meant “milk”. Simple enough. Jess and I even found ourselves asking them if they wanted “milp”. Fun to say.

Well, somehow, a few weeks ago they completely changed it up on us. They no longer say “milp”. Now the word they use for milk sounds way more like “nap”. Â Those were a difficult couple days while we tried to figure out what in the hell they were saying. I still don’t know how they both were able to change the word at the same time. I picture them laying in their cribs at nightÂ conspiringÂ to confuse he hell out of mom and dad.

Last week I was with Alex and Meri while Jess was out. Alex walked up to me and said a word that sounded like “cut”. It was obvious she was asking for something, it wasn’t just a statement. She had nothing in her hands, we weren’t eating or anything. No context clues whatsoever. Just out of the blue. Being 2, she didn’t just say “cut”… it was more like “cut, cut, cut, cut, cut, cut, CUT, CUT, CUT…”

I literally had no idea what she was saying. So I start fishing, “cut?” I ask.

Shit… that doesn’t help me any.

“Something to eat? A toy? Can you help Daddy out?”

Amazingly, hearing the word 75 times hasn’t helped me understand what she wanted. In desperation I turned to Meri to see if she could possibly act like a UN language translator.

Luckily for me, 2 year olds are easily distracted and we moved on to something else. To this day, I still have no idea what she was saying. Jess has heard it as well, and similarly doesn’t have a clue.

Some other word adventures…

The word “more” has been said roughly 7 million times in our house since they first learned it a year ago. However, now it sounds like “moy” instead.

The word “uh-oh” is also used contsantly. Unfortunately they do not understand the difference between an actual accident and something they are doing on purpose. Meri will be standing there unzipping her pajamas all the while saying “uh-oh, uh-oh, uh-oh…”. Sweetie, that is not an uh-oh, you’re just being naughty.

Alex’s big thing lately is “hot”. Everything is hot. If it’s not stone cold, it must then be hot. We have to constantly reassure her that her that nothing is hot.

They are addicted to the movie Monsters Inc. Specifically, the very first scene of the movie where the monster screams and then falls down in the simulator. They let us know they want to watch this by repeating the words “guy fall” over and over and over again.

They’ll pick up their toy purses they got for Christmas from grandma, sling them over their shoulder and say, “bye-bye… seelater”.

Must to Jess’s chagrin, Alex will occasionally just call her “mom”. She gave me a “dad” the other day.

Alex has had a rash on her rear, and she’ll say “bum hurt”. Sad and funny at the same time.

They love to talk about toots and poo poo. They must be my kids after all.

Still, the most uttered word by sheer volume is “uhh”. This is the catch-all word that is repeatedÂ ad nauseum. Any time they don’t fell like using their words and/or don’t know what words they want, they just say “uh uh uh uh uh uh…” it is quite aggravating. That is one bit of this journey I won’t miss when we pass by.

There is certainly never a dull moment in the Habertwin household.