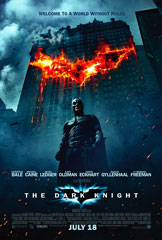 “Some men just want to watch the world burn.”

If you’ve been living under a rock, you might have missed that the latest Batman movie has been released.Â  For the rest of us, it has ben Batmanmania since last weekend when the movie took in a record $155.3 million over the opening weekend.Â  That is absolutley crazy.Â  However, not unjustified.Â  “The Dark Knight” might well be the best movie I’ve seen all year.

Standard disclaimer, there will probably be spoilers here.Â  Read at your own peril.

We pick up the story where Batman Begins leaves off.Â  Bruce Wayne is still batman, but there are copycats donning their own masks and capes in order to foil crime… I think.Â  I was never too clear exactly what was going on with these things.Â  Twas a bit confusing.Â  But, no matter.Â  The mob is still seriously pissed at Batman for crimping their enterprises.Â  Along with the new fair-haired district attorney Harvey Dent, they have shut down all of the money launderers but one .Â  So, the mob, being enterprising types, bring in a chinese businessman to handle all their cash and… ya know what?Â  It doesn’t matter.Â  Other than a pretty sweet snatch and grab by Batman in Hong Kong, all this really does is launch us into “Joker” territory. 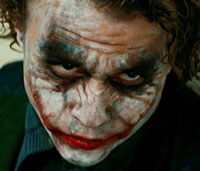 The Joker.Â  Where to begin?Â  Let me say, this ain’t your father’s or even your older brother’s Joker.Â  Heath Ledger’s final performance is so amazing it defies description.Â  He doesn’t just portray the Joker.Â  He IS the Joker.Â  He disappears so fully and so creepily into the role, it is absolutely incredible.Â  Anyone can don a costume and some makeup.Â  It takes serious acting chops become someone else.Â  Especially when that someone else is so disturbed and riveting.

That is the thing about this Joker.Â  All he wants is chaos.Â  He doesn’t want money or power or revenge.Â  The quote above fits him well.Â  He just wants to watch the world burn, and create as much panic and chaos as he can in the process.Â  When you stop to think about that, you realize that everyone plays by rules.Â  Cops, criminals, and civilians.Â  People are basically predictable beings.Â  The Joker is not.Â  He blows things up and kills people for the sheer glee of it.Â  But he isn’t a serial killer type by any stretch.Â  JustÂ  the pure embodiment of id.

At the end of one scene, we see the Joker leaving a hospital in a nurse’s uniform.Â  He has a terrific disjointed yet happy gait that absolutely defines the character.Â  He couldn’t be more happy to be causing such mayhem and destruction.Â  There was no dialog at all, but that little scene tells us everything we need to know about this dangerous force of nature.

I fully admit, I have an exceptionally rudimentary knowledge of comic books.Â  AKA, I’ve never actually read any of them.Â  So, I don’t have anything to compare these movies too.Â  I can’t tell you who comes from where and why.Â  No clue.Â  I only know if the flick works. Well, this one WORKS.

For example, when they introduced the new D.A. Harvey Dent, somewhere in the back of my brain rang a bell.Â  “Harvey Dent… isn’t that Two Face?”Â  That nagged at the back of my head for awhile until I was sure that I wasn’t imagining things.Â  Of course, I didn’t know this from the books… I only knew this from here.Â  As such, I spent the rest of the movie dreading the horrible turn of events which will complete his transformation.Â  Even no I knew it was going to happen, there was still a payoff.Â  The part was played well by Aaron Eckhart, who is a little like a poor man’s Brad Pitt.

Also, I’d like to say that I was glad to see Maggie Gyllenhaall take over the Rachel character from Katie Holmes.Â  She isn’t as cute, but is a 10 times better actress.Â  (Don’t get me started on the sad downfall of Katie Holmes.Â  I’m just pretending that she no longer exists and I can just amuse myself with the movie Go and that old episode of Saturday Night Live.)

Gotham was cast in this movie with Chicago.Â  I think that choice added some more realism to the movie.Â  It wasn’t so fake looking as Gotham has looked in the past.Â  Not to mention that Chicago really is a beautiful city.Â  Side note, it wouldn’t be a “Chicago” set movie without this guy playing a cop.Â  Nice touch.

This movie is long, but well written.Â  There were multiple spots where you’re thinking, “Ok, this is the end” but it twists again and keeps going.Â  This is definitely not a movie you can predict.Â  You just have to let the movie take you where it wants to take you.

There was one really good scene near the end which involves 2 ferries loaded with people, one with commuters and one with criminals.Â  The Joker set up an interesting little “experiement” and we get to watch.Â  As it progresses, it doesn’t quite play out like you might think.Â  I won’t spoil it, but I would say I liked to see Tiny Zeus Lister again.

This is definitely a dark movie.Â  Hell, it’s got “dark” in the title. But, it really is.Â  There is a pretty high body count.Â  The tension is ratcheted up.Â  It is exceptionally sad that this was Heath Ledger’s final movie.Â  I would watch him play The Joker forever.

I cannot recommend this movie highly enough.Â  It’s themes of cops and crime, politics and terrorism are very now.Â  It feels very present.Â  Where Batman Begins was more far fetched (a secret society who wants to destroy Gotham) this movie feels real.Â  It feels now.Â  Well, as real and now as a comic book movie can.Â  Do yourself a favor this summer.Â  Hit the theater, enjoy the AC, grab some corn, and watch possibly the best movie, and undoubtedly the best performance of the year.