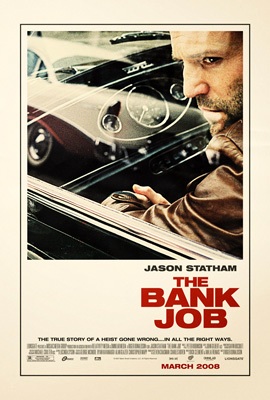 Obviously, this sticks in the craw of the government, so some hoity-toity chaps with impeccable accents in a richly appointed office decide they need to get these photos any way possible. Since they can’t be connected to any attempt, they blackmail an ex-model who was busted for drug smuggling to get some of her proper villian friends to break into the bank safe-deposit vault where the pics are kept.

The blokes she rounds up are small time hustlers who have never taken on such a large job, but they agree and we’re underway. Long story short, they dig a tunnel under the vault, break in, and proceed to crack into about 400 boxes stealing what was inside.

Unfortunately, these not-quite master criminals got more than they bargained for when they steal the property of other nefarious types who kept all sorts of incriminating evidence in those very same boxes.Â  I made the comment to George, safety-deposit boxes hold innumerable sins.Â  They ain’t just for passports and birth certificates.

All in all, I really enjoyed this movie. First off, I’m a big Jason Statham fan. I love to hear him talk. Seriously, I would listen to him read the damn phonebook. He was terrific in this movie as the leader of this band of thieves. The rest of the cast, while very good, were mostly unknown to me. I find it refreshing sometimes to watch a flick where I’m not familiar with all of the actors… sometimes it helps me get a bit more into the story, since you’re not thinking of everything else that person has ever been in.

The setting for this movie was 1971 London. I gotta say, between the costumes they wore and the cars they were driving, it was a treat for the eyes. Not to mention the hair styles. It was almost worth the price of admission just to see the art direction.

When trying to find flaws in this movie, George and I were unable to make a case for any real flaws. I mean, it was a tad slow in a couple places, but not even close to enough to complain about. Acting was solid. No plot lines were left dangling. There were none of those annoying dead-ends that happen in movies where you ask to yourself, “Wait, what happened with XYZ?” In the beginning, there are many different characters and it is difficult to discern what each of their motivations are, but by the end everything is explained, yet not in a Bond-villian-explains-the-whole-plot-to-you sorta way.

My only complaint about the movie really has nothing to do with the movie at all. Being a still rather young 21st century American male, I simply don’t get the whole royalty thing. That’s not to say I don’t understand it, I do… I just mean I don’t get why it is such a big deal. I mean, the lengths the government went and the chain reaction of lives they destroyed just to save a little embarrassment was extreme. Not to mention, this wasn’t even like an elected leader who was standing to lose. It was a princess. Royalty by birth. She ain’t getting fired like Eliot Spitzer or anything. I guess I’m much more of a lassiez-faire type guy when it comes to people’s personal lives. Do what you do. It’s worse to me if you lie about it (Ahem… Senator Craig…). If you are open, I could care less about what you do. Not my business. Don’t get me wrong, I listen to the gossip as much as the next guy, but at the same time, it never upsets me or anything.

I’ve always kind of admired those people who do what they want to do and don’t worry about what other people think. My least favorite kinds of people are those who are uptight and force their views on everyone else. The whole, “We know what’s good for you” mentality. Ugh.

Not that it has anything really to do with this movie.

The Bank Job was a solid, entertaining flick. I do have an affinity for heist movies, and this one certainly delivered.

As a side note, prior to the movie George and I were at the Ram Restaurant & Brewery playing the Buzztime Trivia game they have there.Â  Our best round, we ended up 29th in the nation… out of over 10000 people playing.Â  We were pretty pleased with that.Â  Would have been higher, but we missed one we should have gotten.Â  I love trivia…