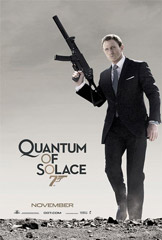 I can’t believe it has been almost 5 months since I’ve been to a movie, but the record doesn’t lie.Â  George and I finally made it back to the theater last night to check out the latest Bond flick, Quantum of Solace.Â  As always, there will undoubtedly be some spoilers in this review.

Quantum of Solace (yes, I think it is a ridiculous title as well) begins exactly where Casino Royale leaves off.Â  I really enjoyed Casino Royale.Â  Far more than any of the previous 5 or 6 Bond flicks before it.Â  It was real, and gritty and visceral.Â  QoS was obviously in the same vein.

The plot revolves around an evil organization that has so far remained unknown to the worlds major intelligence agencies. Â  But, apparently they have “people everywhere” including M’s personal body guard.Â  *insert action sequence*Â  This evil org is obviously very well financed and even better at staying hidden.Â  However, that doesn’t stop them from sewing the seeds of revolution and instability around the globe for financial gain.Â  Bond, in is bulldog-like tenacity is on to something. Â  In seeking information and/or retribution for the death of Vesper (his love in the first flick) he his on the trail of these folks.Â  Unfortunately, he has a bad habit of killing everyone he comes across instead of actually pumping them for information, much to the chagrin of his bosses back in London.Â  Oops.

I suppose the fact that Bond and MI6 don’t know much of what is actually going on plays into the fact that we, as an audience really have no clue what is going on either.Â  It is the same syndrome that Indiana Jones had. Â  I’m all for letting go and trusting the movie to take me where I need to be, but at the same time, when it feels like we are being kept in the dark for no good reason, I start to get a little frustrated.Â  For example, the entire scene of Bond in Haiti, where he runs into the main chick, as well as the main bad guy.Â  However, since he killed the guy he went to Haiti to find in the first place, he, and by extension we have no friggin idea what the hell is going on.Â  We don’t know who these people are.Â  The whole thing is very confusing.Â  The woman tries to kill Bond in the car, but he escapes and she goes to the creepy French guy who is the main bad guy (we learn later).Â  They have an exceptionally obtuse conversation about who is betraying who so on and so forth.Â  If you put a gun to my head and told me I had to accurately explain what the hell happened there, I couldn’t do it.Â  I’m a fairly astute guy, and when a movie does that it makes me angry.

Anyway, this evil guy (who’s front is being CEO of an environmental company) is sponsoring a coup in Bolivia to install a new presidente in exchange for a “worthless” chunk of land in the middle of the country.Â  Ostensibly, there is oil there, (which is what the US and Britain believe) but the new presidente knows there isn’t.Â  “So you must be getting a good deal” evil Frenchy tells him.

When we finally find out what the hell the evil plan was, it is seriously a bit of a let down.Â  Turns out, that by getting that land in the deal, Evil Org ™ now owns 60% of the water resources in Bolivia and will use that fact to double the price to deliver that water to the government.Â  Really? This whole movie was essentially about water rights?Â  Um, that isn’t exactly sexy.Â  And, I’m sorry, maybe I’m just a cold-hearted bastard, but if they were threatening to cut off the water to Las Vegas, that might be something.Â  But cutting off water in the middle of a Bolivian desert just doesn’t move the needle for me.

I will say, there are some cool action sequences in here.Â  Bond does seem to have no regard for his body and spend a lot of time jumping from ledges to other ledges… through windows and doors and off roofs.Â  Don’t forget the driving chases and even boat chases.Â  My problem with a lot of these sequences is what I call “Bourne Syndrome”. Â  In that everything is filmed with the “shaky” cam and really close up.Â  Mix in frenetic editing (all designed to add urgency) but it just ends up making everything confusing.Â  You can’t ever tell exactly what is going on.Â  It’s just blurs of action.Â  That sort of thing can be ok when used in small bits, but when you use it exclusively it is a bit of an overload.

My other problem had to do with the big final scene.Â  It is set at a luxury hotel out in the middle of the desert. Â  Ok, I can buy that.Â  The joint runs on hydrogen fuel cells, since there is no electricity out there.Â  Unfortunately, the engineers who designed that place were grossly incompetent.Â  See, a run-away Range Rover ran into a wall in the parking garage ruptured and ignited a hydrogen container.Â  Whoops. Of course, this sets the scene for the final battle in an exploding and burning luxury hotel.Â  So, instead of having the hydrogen, oh, I don’t know, buried in the ground or something, they have canisters throughout the hotel.Â  Mounted on the walls. Including in the rooms.Â  Silver canisters labeled “hydrogen”.Â  Of course, they are rupturing and burning and destroying the hotel in pieces while we fight.Â  Now, I’m no engineer, but I gotta think that if one little car accident can bring down the entire hotel, that is probably not good design.Â  I’m just sayin.

Also, the final battle with wormy little evil Frenchman and Bond was a little ridiculous. Â  I mean, this guy is a full head shorter than Bond.Â  He is basically a CEO, who has others do his dirty work.Â  Yet, when confronted by Bond in the exploding hotel, he can suddenly whip ass.Â  He and Bond precede to kick each other’s asses for a good 5 minute fight.Â  This is the same Bond who in the scene before disabled and escaped from 3 MI6 agents while in an elevator.Â  While his hands were cuffed behind his back.Â  Um… yeah.Â  It would have been more realistic if the guy had gotten his one shot in on Bond by surprise, and then Bond taking this guy apart in about 0.4 seconds.

Anyway, I’d say I enjoyed the movie.Â  Despite what this review looks like, I thought it was worth the price of admission.Â  It wasn’t as good as Casino Royale, but it certainly wasn’t “bad”.Â  Apart from the confusion, I thought it was a worthy entry to the Bond canon.Â  They are obviously setting this evil organization to be Bond’s nemisis for the next movies.Â  I just hope they come up with something a little more intersting that water rights.