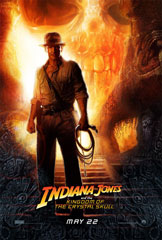 George and I were desperate to catch Indiana Jones and the Kingdom of the Crystal Skull (is that an unwieldy name) on the big screen before it left. We were finally able to jive our schedules and headed to the theater.

Again, spoilers are sure to follow, proceed at your own risk.

The basic premise of this installment of one of the great series of all time is that another friend of Indy is in trouble and he is enlisted as the only one who can help. Basically, this is the impetus of every Indy movie (except 2, which might as well have never happened). This time around, we’re set in 1957 and instead of battling the Nazis, we’ve upgraded to a new villain, the Soviets. When I first heard that there wouldn’t be any Nazis this time around I was a little disappointed, but it makes perfect sense that the communists would take over in the bad guy department.

The flick starts off with Indy being in the custody of a rather large group of Soviet soldiers somehow operating free and clear in the US. Not quite sure how that would work, but I digress. They brought him to a hidden US Army warehouse where “all of your secrets are hidden.” We have seen this place before, and fans of the movies will instantly recognize it. Why the army would have an important facility so lightly guarded is another question. The Soviets are looking for something that Indy had found and handed over to the government some 10 years earlier. Long story short, they find it and kick off a big action sequence. I liked the touch of showing us a shot of the Ark. Enough to make me smile.

I don’t want to get too deep into the actual plot, because frankly, it didn’t make a lot of sense. In the previous movies, Indy and by extension, we the audience knew what his mission was. He was looking for the ark of the covenant or he was trying to find the holy grail. Here, it is something to do with ancient Mayans, crystal skulls, and aliens. It didn’t make a whole lot of sense, but I guess that’s not the point. You go to a flick like this for the action. There was plenty of action. Although, this movie makes the mistake of turning everyone into indestructible supermen. I mean, there is a scene where 4 people go over not 1, not 2 but 3 waterfalls in an open top “duck”. Nobody gets as much as a scratch. Nobody drowns. Nobody even loses any personal effects. Not quite sure how that works. Prior to that there was a nice chase scene along a cliff rim that was a little hair raising and fun. Oh yeah, the gigantic South American ants were a creepy touch.

The end of the flick shifts into full on alien crap that really just kinda lame. Oh well. This movie followed the formula and did it well.

I will say, there was a throw away line that should have been the plot for this movie… or 10 movies and I would have watched every one. When Indy is being interviewed by the FBI about his dealings with the Soviets, they question his loyalty (it was set in the 50’s afterall). But it was mentioned that Indy did 40 missions with the OSS (precursor to the CIA) during World War II all over the globe. WHAT!? Are you kidding me? We could have had movie(s) about Indy operating during WWII and you don’t show us that? I feel cheated! THAT is the movie I want to see, not this crap about aliens. Dang. It never occurred to me what Indy might have done during the war. I figured that he would remain a professor while the world was in flames, but it obviously makes more sense that he would be recruited to perform missions suited to his skill set. The more I think about it, the more I want to see more of that time period.

All in all, I enjoyed Indy this time around. I would have to say that this movie stayed true to the formula and was fun to see. The hat, the whip, the music. It was all there and great to see again. If I had to rank them, Raiders is still first, and Last Crusade is still second. I would place this one 3rd and Temple of Doom is 4th. I will undoubtedly watch it again on video.

As we were heading out of the theater, we saw the sign for Hancock starting in 5 minutes. We kinda looked at each other and thought, why not? I used to love doing double features, but usually Jess can barely stay awake for one movie, two in a row is no chance. Since Geo and I both wanted to see it we figured what the hell and headed in. 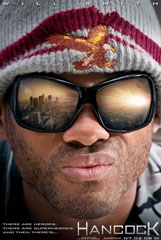 Hancock is not your typical super hero movie. Will Smith plays a depressed, drunken indestructible “hero” who has stopped caring long ago. Whenever he helps the police, he ends up creating a vast wake of property destruction. Now, this is nothing new in super hero movies. I’ve long time wondered when you watch these flicks about what happens in the aftermath. They are blowing up bridges and knocking down buildings, generally causing billions of dollars in damage to public infrastructure. But, we never see the aftermath. That’s why this movie’s angle was so enjoyable. Hancock gets some very negative reactions for his destructive ways. Basically, the public no longer appreciates his helping the police out.

After Hancock saves a PR guy’s (Jason Bateman) life, he takes it upon himself to rehabilitate Hancock’s image. I loved this first 2/3 of the movie. It was something totally different. Unfortunately, the last 1/3 of the movie, it downshifts into a more standard super hero movie. I think if they would have kept along the path they were following it would have been an outstanding movie. Instead, it had the feel that they didn’t ultimately trust the film they had and maybe they had to appease the “geeks” who turn out in droves for super hero movies. I don’t know. I really think they should have kept along the personal growth plot line, but maybe that’s just me.

Will Smith is again great in this movie. I really liked that they portrayed him as seriously rough. He’s drinking whiskey from the bottle and actually swears. They didn’t try to sugar coat it and come off fake. You really feel for the guy in that he doesn’t know who he is, and is acting out to push people away. It’s just really well written and acted. And until it goes sideways with 45 minutes left, it was really really good.

I did enjoy Hancock and do think it is worth seeing. I’m glad we caught it.

Jess asked me which movie was better. That is a tough question, and despite my thinking about it, I don’t think I have an answer. They are both very close. Neither was perfect but neither was horrible either. I would call them “solid”. If I had to lean, I might give a slight slight edge to Hancock, if only for the reason that Charlize Theron is in it.

Happy 4th of July everyone!