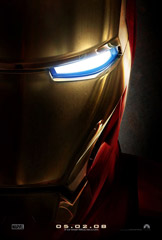 In the midst of all this nonsense I’ve got going on, George and I went to go see Iron Man. We also had a few beers that night, which I desperately needed after the past week.

To be perfectly honest, I can’t seem to generate much to complain about this movie. Could be the fact that I just can’t muster the energy to analyze this thing at the moment. Perhaps it’s just that the movie was good and it’s always easier to write negative reviews. Actually, I’m sure its due my current lack of writing mojo.

But, since I’m trying to write something about every movie I see in a theater this year, I gotta get at least a little something down. As always, there may be a few spoilers involved here, so be aware. If you wanna go into the movie “clean” don’t read further. (Maybe that’s just something I do, I’m not sure).

Next up is gotta be Indiana Jones. Hope it’s good!