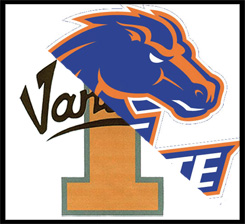 Today was the day. Rivalry game. Boise State University vs. University of Idaho.

Let’s just say it was interesting. For those of you who don’t know, I am a gigantic Boise State Bronco fan (and an alumnus), Jess is a life long Idaho Vandal (an alumnus). This is the first game day since we have moved in together.

This whole week has been very easy. Neither of us discussed the game much. We have both been so busy lately, we just haven’t had the time to gently jab each other about this upcoming weekend. I guess part of that is that the teams are so unevenly balanced at the moment. I try not to rub it in too much, specifically because I still remember when BSU sucked, and its not fun. So, we’ve been remarkably civil to each other.

That all changed this morning. We were going to her friends house this morning for a party which I would leave to actually go to the game, while they all hung back to watch on tv. After rolling out of bed, and getting all of our crap together to go, she had only snapped at me 3 or 4 times. She said it was because she hadn’t had any coffee yet, but I think she was none too excited for game day.

All of her friends are Vandals, but they are all very cool. We hung out, had some breakfast, cooked up by Darin, and of course, started drinking. Hey, it was game day! I mean, some of these folks were playing beer pong at 9:45am. I had a Baileys and coffee, and a couple mimosas. Jess, however, took a different approach. By the time I left for the game, she was, if not 3 full sheets to the wind, at least 2 and a half. Basically, when you are loaded at 11am, the day is probably not going to end well.

The game, if you haven’t heard, was close for a half. Second half, Boise State pulled away and ended up blowing the Vandals out 58 to 14. It was actually 17 to 14 at one point, and I was a bit nervous. Of course, that all went away as BSU scored the next 41 consecutive points.

A few observations of the game. First, the referees were absolutely horrible. They blew calls on both sides. Missing pass interference calls. Calling an absolute bullshit “roughing the kicker” penalty. Plus, they let a LOT of post play “extracurricular” activities go. The game was pretty chippy, especially in the second half. And they didn’t penalize it at all. Second, late third quarter when BSU was up by 24 a few Idaho guys were doing a lot of post play taunting and strutting after making a tackle. You really have to wonder what game they were watching. Most times, taunting is not cool. But when you’re getting bludgeoned you probably should be doing it ever.

One other observation? This is the second consecutive year where at no time have I had to wear a coat to a football game. We have been unbelievably lucky. Not even when I have traveled for games. No coats. I have been to 19 games live in 2 seasons, and have not donned a coat. The closest was at Nevada last year, but that day was gorgeous and close to 60 degrees on Thanksgiving weekend. Global warming? The funny thing was that in my previous life, (aka. married) we had the worst luck including 10 inches of snow in the very same Reno, and blowing sleet at BYU and lots of freezing home games. Maybe Jess is good luck.

I was quite enjoying the day, Jess apparently, not so much. In the time honored tradition of many losing teams, “Win or Lose, there’s Always Booze.” I kept getting text messages that gradually degenerated as the game progressed. Starting with “woohoo baby woohoo!” after U of I scored their second touchdown… to “i’m wastoid” (response to my question of “how you doing?”) at half time. “I’m f*cked up… sorry” came about an hour later. All culminating with gems like “…sorry the wheels are fallin off. ughhh” and “…i’m not doin too good. I wanna go home. this sucks”.

When I got home, she was in bed asleep. I was home for about an hour and watching football downstairs before she even knew I was home. Poor baby. She really hurt herself today. After I got us a pizza for dinner, she had a little, and went back to bed at about 7pm.

No worries, baby. It’s happened to the best of us.

Following a bad football team, when you care as much as she does, is a tough row to hoe.

On the plus side, there are 364 more days until we have to do it all over again.

Footnotes… Boise State has outscored the last 3 opponents 152-21. This win makes 9 straight vs. Idaho (approaching “Streak” territory). Hawaii for all the marbles next Friday.

2 Replies to “A House Divided”