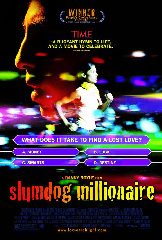 If you haven’t heard of the indie phenomenon called Slumdog Millionaire, I don’t know where you’ve been.Â  It’s everywhere seemingly, including the Oscar noms.Â  The other night Jess and I finally made it out to see it.Â  What follows is my review, which as always, will most assuredly contain spoilers.Â  Continue at your own risk.

I can honestly say that this movie is really unlike anything I’ve ever seen before.Â  It is a remarkable movie.Â  I can tell you, it completely earns it’s 94% fresh rating on Rottentomatoes.com.Â  I am the first to admit that I am woefully ignorant about life in India beyond what I have seen in Gandhi and Indiana Jones and the Temple of Doom.Â  The first of those was probably a little more accurate, but I digress.Â  The basic premise of this movie is the story of a young man who goes onto the Indian version of Who Wants to be a Millionaire.Â  The movie begins with him being “gently” interrogated.Â  We the audience are unaware as to what is going on.Â  Turns out, they are trying to figure out how he answered all the questions correctly.Â  The rest of the movie is spent as he tells the detective his story and how he learned the answer to each of the questions.Â  I know it sounds a little strange, but it is a very effective way of telling a story.Â  Again, not like anything I’ve seen.

The first thing you notice is the cinematography.Â  The camera really seems to love the vistas of India.Â  And I’m not talking natural beauty.Â  The story is that of an orphan who grew up in the worst slums of Mumbai.Â  The visuals are outstanding.Â  You get to see the underbelly of a society where there is some serious disparity between the “haves” and “have nots”.Â  These kids are most certainly “have nots”.Â  After their mother is killed, it is up to them to find a way to survive.Â  The film really has a tough edge which is absolutely necessary to describe just how difficult a childhood on the streets could be.Â Â  The movie does not pull punches.Â  There is shocking violence.Â  These boys had to grow up quickly, especially after they are “befriended” by a man who uses them to beg on the streets.

I don’t really want to get into all of the plot points.Â  Even with the spoiler warning, I don’t want to give the whole thing away.Â  Instead, I would like to discuss the characters.

Jamal, the protagonist and Millionaire contestant.Â  I was simply amazed at how this character grew from a child to a man in those conditions yet was able to maintain his dignity.Â  It was quite interesting to follow his story.Â  We basically see 3 stages of his life.Â  Orphaned at age 7, surviving at age 14, and age 20 on the game show.Â  This kid is very likable.Â  You are absolutely rooting for him the entire time.Â Â  I really like how the movie dealt with this character in regards to the game show.Â  He is not a genius.Â  He is just a regular guy who’s knowledge happened to match the questions asked.Â  My only critique of the actor is that there are a few to many times where he played it with this vacant look on his face.Â  I realize that a lot of times he was thinking about these horrible events in his life, but he was much more engaging when he was at least showing some emotion.Â  My $0.02.

His older brother Salim was the tough one.Â  He was the enforcer.Â  The protector.Â  He was also the one that fell in with the criminal element when they got older.Â  There are times when he does some despicable things.Â  However, there are times when he is forced to do the wrong thing in order to protect his brother.Â Â  Salim has a coldness to him, yet ultimately redeems himself.Â  Seeing Salim go down the road he does really highlights what Jamal makes of his life.

The host of the show is an exceptionally slimy character, especially at the start of the movie.Â  The hair, the suit, the earring and frankly just his overall act is just so creepy.

I think one of the more interesting characters is that of the detective.Â  At the beginning of the movie, you think that he might be one of the evilest men around… his leading of the brutal interrogation being our first introduction to him.Â  But as the movie progresses, we see him soften.Â  Just slightly.Â  He is listening to Jamal’s story and perhaps feels for the kid.Â  We never see any outward shows of his transformation… instead we can feel it.Â  Just a very subtle change in the mannerisms of the actor playing the part.Â  Very well done.

Finally, the young woman who plays Latika, the love interest of Jamal is absolutely beautiful.Â  Her adult character isn’t on screen for that long during the movie, but she completely lights up the screen.

This movie really is too deep and complex to sum up in such a small space.Â  You really have to experience it for yourself.Â  See something you probably have never seen before.Â  It really benefits from being seen on the big screen as well.Â  Do yourself a favor and make every effort to see this outstanding movie in the theater.Â  Do it.Â  Go tonight.Â  You’ll be rewarded.