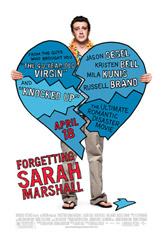 The latest in the Judd Apatow production machine is a movie called Forgetting Sarah Marshall. He is the guy that gave us The 40 Year Old Virgin and Knocked Up. However, he didn’t write or direct this one, only produced it. Frankly, this movie isn’t near as good as either of those flicks.

The movie centers around sad-sack Peter who in the first scene gets dumped by his TV star girlfriend of 5 years while in the buff. That’s right. We’re treated to a little full frontal male nudity not 5 minutes into the flick. Not that there is anything wrong with that… Did it feel a little gratuitous? Yes. Was it necessary to tell the story? That is questionable.